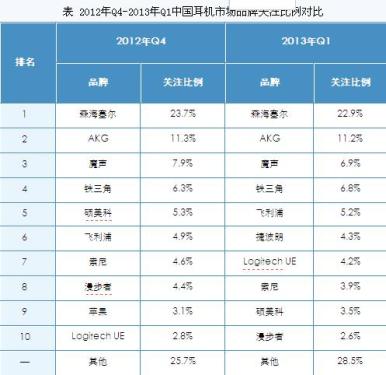 As early as 2012, the trend of high-end headsets towards portable HiFis has become apparent. After entering 2013, various types of earphone products have begun to be pro-infants, gradually allowing more users to enjoy the pleasure brought by high-quality sound quality.

â€¢ Brand focus: Sennheiser topped brand awareness with a 22.9% share of attention; after the top two, the brandâ€™s share of focus was below 7%, with a small gap between them.

â€¢ Product Popular Models: The ten products most concerned by users belong to seven brands. Sennheiser has the largest number of finalists, and there are three; Monster has two products listed; the remaining five finalists each have a product listed.

â€¢ Instability of brand awareness Compared with the brand awareness of the Chinese headset market in the previous quarter, the top four brands have remained unchanged. Sennheiser's top priority is significant. AKG maintains a certain gap with the top two brands. The gap between the Monster and the Iron Triangle's attention has narrowed. Other short-listed brands have a share of less than 6%, and a minor concern about the share of the float will cause changes in rankings.

Second, product attention to the pattern

(I) Popular models of products â€¢ Sennheiser was shortlisted for three products In the first quarter of 2013, the ten most popular products of the Chinese headphone market belonged to seven brands. Sennheiser has the largest number of finalists, and there are three; Monster has two products listed; the remaining five finalists each have a product listed.

AKG K420 single product has the highest share of attention, and it is a head-worn dynamic headset that is suitable for game video and iPod. It is priced at RMB 280 at the end of the quarter.

â€¢ For products with a price under $300, four products were listed in this quarter. Sennheiser ORPHEUS continued to receive a higher share of the price due to its price as high as 200,000. Among the remaining short-listed products, there are four products that offer less than 300 yuan.

â€¢ In-Ear Products The largest number of short-listed Earphones in the top 10 earphone products, including five. There are three models of head-mounted products. Ear plugs and ear hooks each have a product to be selected. Among them, the ear-mounted product Jabra Stone2 (Hyunshi 2) is a Bluetooth headset.

(II) Product price 1. Price segment â€¢ Concern price is concentrated in 101-300 yuan In different price segment earphone products, the number of products with 100 yuan or less accounted for the highest proportion, nearly 40%, the lowest share of attention, less than 10%. ZDC analysts believe that the purchase of lower-priced headset products focuses more on online, and thus the share of attention for products of 100 yuan or less is significantly lower than the proportion of their products. The price of products in the price range of 101-300 yuan was the highest, at 32.9%, slightly higher than the number.

(III) Wearing methods of products â€¢ The highest proportion of headsets and the highest share of attention. In headsets with different wearing methods, headsets cover the headset through the earmuffs, allowing the audio source to be heard and heard. Stronger three-dimensional, and not easy to hurt the ears, its number accounted for more than half, with the highest share of attention, 47.5%. The compact portable earphones have a share of nearly 30 percent, slightly more than their share.