In today's increasingly competitive business environment, whether products are easy to upgrade on the spot and whether they are easy to use flexibly become a key factor for businesses to quickly capture the market. Against this backdrop, FPGA devices based on SRAM LUT structures developed by Alter have been widely used.

2. How FPGA Devices Are Configured

The ICR-enabled FPGA devices produced by Altera Corporation are FLEX6000, FLEX10K, APEX, and ACEX series, which can be configured in the following ways:

The following detailed analysis of the above five configuration methods.

The boundary scan method needs to be connected to a computer and cannot be used in the field. This method is rarely used in embedded systems.

Through the above analysis, when using an FPGA in an embedded system, a dedicated EPC configuration device, PS, PPS, PPA can be used, but PS, PPS, and PPA have more cost and volume advantages than dedicated EPC configurations. In PS, PPS, PPA, PS is the optimal communication method. Therefore, in the embedded system, PS passive serial mode is usually selected to configure the FPGA.

The five signal lines are nCONFIG, nSTATUS, CONF_DONE, DCLK, and DATA, respectively, and are connected to the microprocessor's five I/O ports and corresponding FPGA pins. 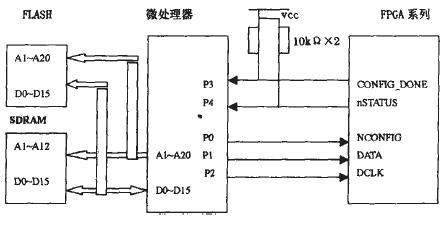 Programs stored in the FLASH include system programs, configuration programs, and configuration files. After the system is powered on, the microprocessor starts running from the boot program at address 0 of the FLASH. After the system is initialized, the microprocessor moves the application program in the FLASH to the SDRAM for operation. Since most of embedded systems currently use real-time multitasking operating systems, the configuration program should be placed in the first running task to ensure that it starts to run after startup.

The software design is based on the timing requirements of the microprocessor and FPGA communication signal lines. First initialize the port of the microprocessor and generate a 20Î¼m negative pulse on the P0 pin. Read the signal on the P4 pin. If it is high, start data preparation, read the data, and serialize the data by shifting. The bit stream sends the lower data to the P1 pin and generates a rising clock edge through P2. Because the rising edge of the clock is synchronized with the data transfer, the signal on the P1 pin is passed to the FPGA. Then read the data right shift, put the lower bit on the P1 pin, and then generate a clock rising edge on P2. If this cycle continues, the next byte is read when the read-out of one byte is completed, and it is transmitted in the same manner. At the same time when data transmission is detected, whether P4 (nSTATUS) is low or not, if an error is encountered during the transmission, P4 will be low, so that the system needs to be reconfigured. Wait until the data is transmitted and check the status of P3 pin. If it is high, it indicates that the configuration is successful. If it is low, it means that the configuration fails and the system needs to be reconfigured.

Software design language can choose C, also can use assembly. In the development process, according to the characteristics of the hardware of the chip, attention is paid to optimization in various aspects. Because the speed of reading data from SDRAM in the embedded system is very fast, the software design does not need to consider the transmission speed problem from SDRAM to the microprocessor. When writing data to an FPGA device, the least significant bit first. The configuration timing generated by the microprocessor can be achieved by sending high and low levels to the timing pins.

Today's embedded systems have been applied to various fields, so no matter the cost or volume optimization, it is very necessary. Using the resource advantages of the embedded system to complete the special functions of other components can effectively achieve the effect of optimizing integration and reducing costs. The general solution discussed in this article is applicable to different microprocessors and all related serial FPGA products of Altera Corporation. Since the FPGA has a reconfigurable function, a plurality of configuration files with different functions may be pre-configured in the embedded system, and the corresponding configuration may be performed according to the needs of the site. This fully demonstrates the design concept of FPGA field upgrades and flexible use.